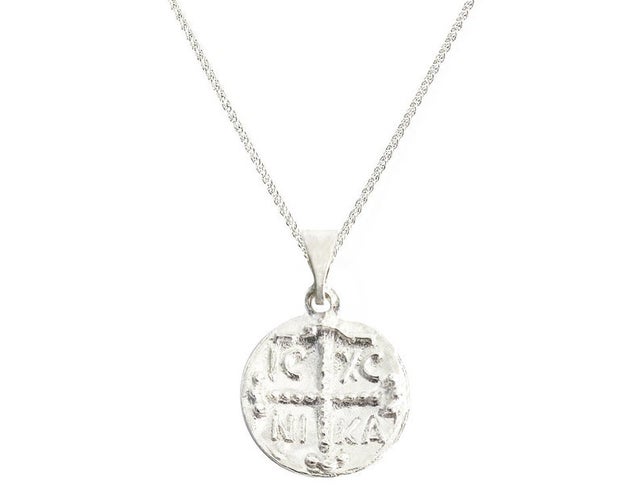 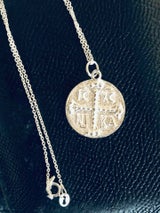 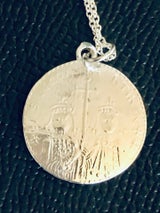 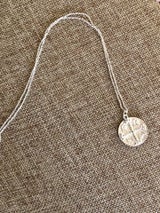 This exquisite Byzantine coin pendant is handmade in Greece and features a cross and the Christogram ΙϹΧϹ NIKA on one side and Saint Constantine and Saint Helen on the reverse. This symbol is known for offering protection and consolation. It hangs on a beautiful .925 Sterling Silver chain.

The Byzantine Period began in the fourth century AD when Emperor, St. Constantine, first christianized the Roman Empire and transferred the capital of Rome to the ancient greek city of Byzantium, renaming it Constantinople in his honor. During this period a synthesis of classical Greek, Roman, and Christian culture gave birth to unparalleled achievements in art, architecture, and jewelry. Many of these achievements can be seen in the magnificent Byzantine jewelry and Byzantine cross pendants which are collector's items and found in many museums. The designs tend to be ornate with detailed workmanship.

A Christogram is a combination of letters that form an abbreviation of the name of Jesus Christ. The most widely used Christogram is a four letter abbreviation ICXC NIKA of the Greek words for Jesus Christ Conquers. This symbol is known for offering protection and consolation. The reverse side features Saint Helen and Saint Konstantinos, a Christian symbol that attracts abundance and prosperity.

Handmade in Athens, Greece by Rosana